Brushless Direct Current (BLDC) motors are quickly on the rise in the automotive aftermarket. This sophisticated technology first appeared in the mid 1990's and has gained popularity with the O.E. due to higher speed ranges, longer operating life and higher efficiency, just to name a few.

Brushless Direct Current (BLDC) motors are true to their name because they utilize electronic sensored or sensorless commutation instead of brushes. The most common failure of the brushed design blower motor used for decades are the brushes themselves.

BLDC motors are more efficient by design. This design has characteristics such as quieter operation, greater speed control, increased efficiency, less weight and are usually smaller than their brushed counterparts.

In between the evolution of the brushed design and brushless technology, the PWM (Pulse Width Modulation) controlled brushed motor was developed. PWM brushed motors use a digital signal generated from the vehicle’s ECM (Engine Control Module) to send a duty cycle to the PWM controller to vary the speed of the brushed motor.

NEWER TECHNOLOGY
Brushless blower motors are designed to provide precise control and a longer lifespan. The newer technology adds to the complexity of the motor’s electronics which come with an increased cost. However, with efficiencies such as increased speed control, reliability and service life, investing in a BLDC motor can often be recovered throughout the life of the unit.

WHEN IT COMES TO YOUR BRUSHLESS MOTOR NEEDS, LOOK TO FOUR SEASONS - QUALITY, COVERAGE, SERVICE

This Four Seasons motor is our improvement over GM’s high failure HVAC brushless motor. Our design is engineered with the reliability of a conventional brush type motor and features new electronics, a more heat resistant housing and a shorter wheel for easy installation. 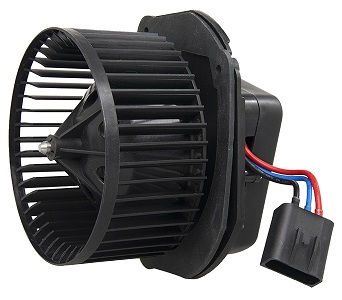